Ninelocks.com is named after a flight of canal locks located at the Black Delph in Brierley Hill in the West Midlands. Although called the Ninelocks there are only 8 locks!. 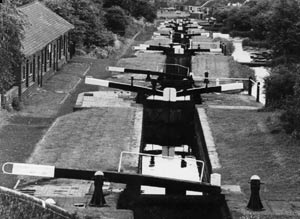 The Ninelocks are also famous for being located near the home of Bathams Brewery, Which is behind Bathams famous pub known as the Bull and Bladder .

The survival of Britains canals is thanks to the work of the Inland Waterways Association the formation of the IWA was largely inspired by the book Narrowboat by L.T.C Rolt .

The IWA was founded in 1946 its origin can be traced back to a meeting between Robert Aickman and L.T.C Rolt at Tardebigge in August 1945. The IWA campaigned to save many of Britains canals which in turn led to more leisure use of the waterways.One of the first companies to provide hire boats on the UK canals was the Canal Cruising Company